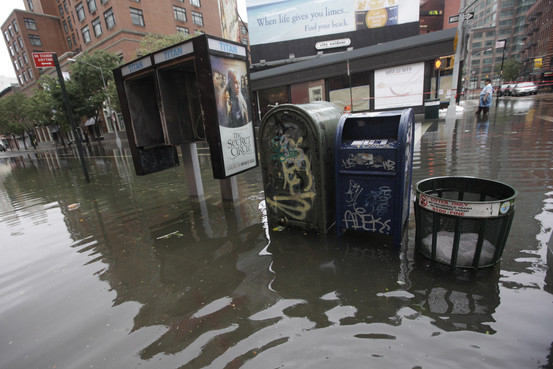 When I moved to New York City in 2007 from Central New York, severe weather (aside from the occasional blizzard) was not something I expected to encounter. Even when I moved to Ithaca for college from Birmingham, Alabama, I felt the same. However, since moving to NYC, I have experienced at least three tornadoes that have touched down and one hurricane (the earthquake does not count for this posting). I use the term ???experience??? loosely, meaning simply that they passed through the city limits while I was here and I saw the damage left from some of their paths. However, it was a different experience than I had growing up in Birmingham, Alabama, where I witnessed large trees being ripped up from the ground by the winds, and where a massive tornado rampaged and killed over 100 people in the state in April 2011. (Disclaimer: I was in New York during the 2011 tornado, but I know people affected directly by it from property destruction to loss of family members.) After the recent tornado touchdowns in Breezy Point and Canarsie, and a tornado watch and severe thunderstorms yesterday, The New York times has written about New York City???s slow adaptations to rising sea levels and storm systems.

The Times article discusses how ???[m]ore frequent flooding is expected to become an uncomfortable reality,??? and reminds readers that, while the city government is apparently concentrating on buffering up protection for the low-lying financial district, areas like the South Bronx and Sunset Park in Brooklyn are also prone to flooding. The waterfronts of these two areas are industrial-bordering-on-residential, and a warning is made as to the potential dangers of storm surges and flooding of the industrial sites. New York City Environmental Justice Alliance points out that six neighborhoods that are environmental justice communities are all in storm surge zones and run the risk of flooding toxic materials from industrial sites into residential areas. In addition to the above two mentioned neighborhoods, there is Red Hook and Brooklyn Navy Yard in Brooklyn, the Newtown Creek area that divides Queens and Brooklyn, and the North Shore of Staten Island.

The South Hunter???s Point portion of Newtown Creek in Queens is under development for mixed-use and middle-income housing, with 60% of the residential units to be categorized affordable to middle-income. Part of the development plan includes expanding the waterfront parkland down from Gantry Plaza State Park to Newtown Creek. This development, in addition to Newtown Creek???s status as a Federally-designated Superfund, presents a great opportunity for the city government, the Economic Development Corporation, and possibly the EPA to remedy potential problems that rising water levels and increasingly intense storm systems pose to the waterfront communities along Newtown Creek.

As New York City updates its laws to address rising water levels and heavy rains from storms and climate change, it is important to remember the communities most directly affected by flooding. Much development needs to occur in many facets of New York???s infrastructure to handle the environmental challenges of the present and future, but this is not a time to again pass over the needs of environmental justice communities. The needed improvements to the City???s waterfront demonstrate the necessity of full community-involvement and input to government and economic-planning.

← RIP Russell Train
“Green” Presidents: Perspective and the Importance of the 2012 Election →