What’s In The Water? 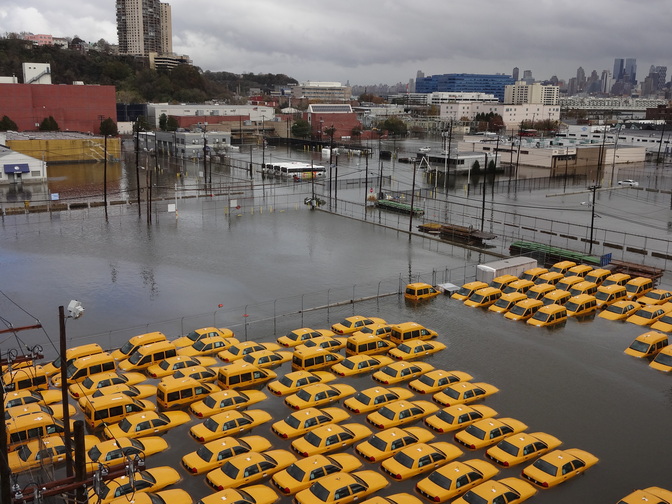 I’ve previously written about sewers and the potential environmental justice implications that extreme weather might pose in New York City. Again, in the aftermath of Hurricane Sandy, I feel like I am seeing weather that I expected to see when I lived in Alabama, but not in New York. NYC is clearly not a well-prepared area for such a natural disaster, and its approximately 520 miles of waterfront are susceptible to flooding during a hurricane. New Jersey, of course, also faced massive damage — it is a sea-facing state, and its counties across the Hudson from NYC are in marshland and surrounded by rivers.

As talks begin (and hopefully progress) about prophylactic means to address potential natural disasters in the future, it is important for majorly-affected communities to ensure they have a voice and are included in the protective measures. Seawater–a threat to all kinds of life–, storm surges and rising rivers are not all that should be addressed. Residents and workers in the proximity of the Federal Superfund sites of Newton Creek and Gowanus Canal in Queens and Brooklyn, and Raritan Bay in Sayerville and other towns in New Jersey, understandably have concerns about possible exposure to toxic chemicals. Beyond the Superfund sites, toxic chemicals have been found from the Financial District in Manhattan to up the Hudson. Some of these chemicals are not from long term polluted sites or waterways; they originated with automobiles, boats, industrial sites and contaminants from flooded roadways and subways. Like nature, harm from chemical exposure doesn’t discriminate. However, unlike nature, many parking lots, industrial sites and major zones of travel are placed near low-income and minority communities in a discriminatory manner.

Sewage exposure is also an increasing risk with flooding and future large storms. NYC’s, not to mention much of the nation’s, sewage system is in need of a major infrastructure overhaul. Already too often on days of heavy rain, sewage overflows into the waterways. The ability of citizens to learn about such leaks is limited. Indeed, only this year did New York State pass a sewage right to know act. Increased awareness of potential sewage exposure and the system’s overflows is necessary for increased public pressure on elected officials to enact such an overhaul. Too many environmental justice communities are near or on the waterfront, and more mixed-income and mixed-use waterfront communities in NYC are planned. As more residential and commercial units are added to the already struggling infrastructure, the problem will only increase. Future hurricanes and major storms carry with them an increased risk of sewage exposure to environmental justice communities and to all waterfront communities.

Any and all plans the City, State and Federal governments implement to address potential future Superstorms need to address the location of industrial sites, the storage of vehicles, the location of communities, and the sewer system. Owners of industrial and other sites near waterfronts and any residential area should take steps to ensure that any possibly dangerous chemicals are on higher ground and safely handled, both by personnel and in storage. The sewer system is in need of a major overhaul. All residents can help by using less water generally, work to reduce runoff from their homes, apartment and office buildings, and “let it mellow” and avoid showers or washing clothes during storms. Each of these protective and preventative measures, however, must ensure that the protection is equal across the population regardless of income or neighborhood, yet with a greater concentration of measures on communities in City Flood Zones A – B. Storms are not fair; it is time for people to be.

← The Inequality of Disaster Relief
BP Guilty Plea: Vindication or Drop in the Ocean? →